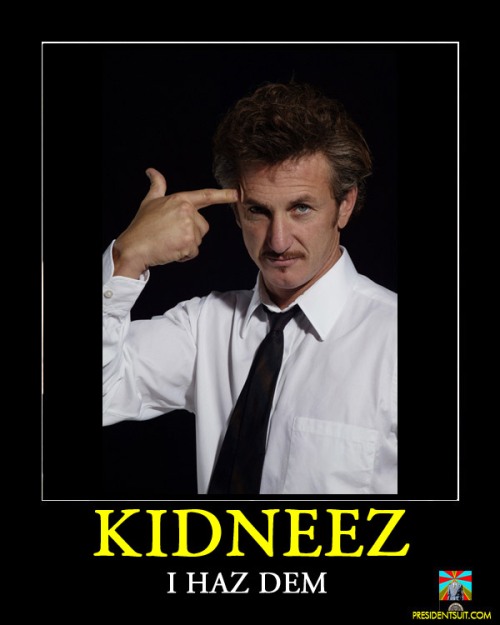 It’s been a big week for Sean Penn!  Despite not being nominated for an Oscar, he managed to appear on CBS Sunday Morning where he said that his critics should all die screaming of rectal cancer, on the same show he got to show off some professionally-produced home movies of him carrying supplies from a helicopter to a truck in Haiti (or for all we know, it was on the backlot at the movie studio since there did not appear to be any actual Haitians around or anything recognizably Haitian and most of the shots were very tight on Penn’s face), then he was a presenter at the Oscars, then he made a widely reported statement that anyone in the US media who calls Venezuelan dictator Hugo Chavez a dictator should be put in prison, then he may or may not have gotten into a fight with his ex wife’s new boyfriend at the post-Oscars Governors Ball (Sean Penn violent? I’m shocked, shocked I tell you!), then Tara Palmeri from the Washington Examiner had the extreme gall, poor manners, sacrilege and bad taste to dare ask Mister Penn a question related to his “rectal cancer” comment earlier in the week and was given the bum’s rush away from The Great One’s stellar presence (just who does she think she is, a working journalist?), then none other than Hugo “Don’t you ever call him a dictator or I’ll have you put in jail!” Chavez gave a shout out to Penn at a rally in Caracas!

Penn’s a fair to middling actor whose success is either due to the mediocrity of today’s “movie stars” that someone with a modicum of talent can so easily stand above the rest, or probably more realistically it is because people in Hollywood don’t want him to beat them up so they keep telling him how wonderful he is while their eyes are darting ar0und looking for the nearest exit or policeman.  But I join with others who won’t patronize his movies because in his personal life he is against everything that I stand for.

Wasn’t there something about Penn and some other Commie movie stars setting up a movie studio for Chavez?  That sounds like a great project to keep him busy for a few years.  Sean Penn leaving the United States for an extended period of time is something I can wholeheartedly support!