What a crock of barack! The bill passed, so why is he still selling it?

When you piss off the libs, you know you’re getting under their skin!

In my hot-tempered youth, I had a dalliance with the Left; it was the 1960’s, there were girls and drugs and it was fun to stand in the open air with hand made signs and chant slogans like Ho Ho Ho Chi Minh! In those days, I used humor as my primary political weapon and was inspired by John Lennon who turned political… comment as humor into an artform. I still use humor and have been a Conservative for decades. The sad thing is how the Left has lost their ability to use humor. They are so serious!

Here’s a comment I made on the Swampland blog recently after being ridiculed by two Leftists, diecash1 and formerlyjames. I enjoy when Leftists ridicule me because it means I got under their skin! LOL Anyway, here is my response to them:

diecash1 and formerlyjames Thanks for your comments! I am saving all the responses I get from
folks like yourselves for use in a book I am writing about how the current Left lacks any discernible working sense of humor (ridicule of Conservatives is not really a form of humor, but you wouldn’t understand that. LOL) Nearly all of you have forgotten John Lennon’s legacy of using humor for political purposes, which is why Air America went out of business; it just wasn’t entertaining!
from Time magazine’s eulogy for John Lennon” “One of Lennon’s many gifts was his humor. He knew that many people were laughing at them. He didn’t care. He cared that the message was being heard. If disbelievers were going to ridicule his peace protests, that was at least preferable to them being engaged in violence. One of the secrets of Lennon (and indeed all four Beatles) was that he took his work seriously. But he never took himself too seriously.”
Read more: http://www.time.com/time/sampler/article/0,8599,91207,00.html#ixzz0jVLNYlBV
Read more: http://swampland.blogs.time.com/2010/03/21/closing-arguments/#ixzz0jVNUEeQO 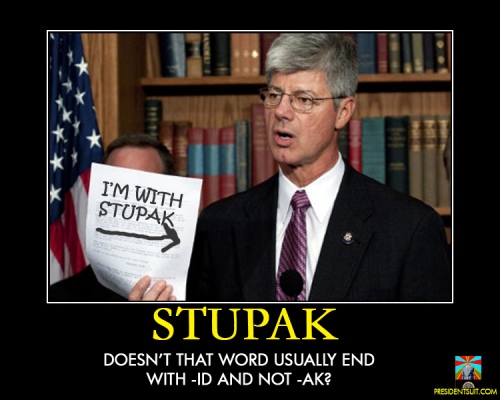 220 Blind to the Polls, Deaf to the American People

The “Deem”-o-crats are prepared to shove this takeover of the health care industry down our throats this weekend by any means necessary.  If they get away with the “Slaughter Rule” and “deem” this passed, Obama will use this again and again until eventually, he won’t even need Congress to pass any legislation he wants.  I hope I’m wrong about this.

Dennis Kucinich: The price for his healthcare vote

Everyone has his price and Dennis Kucinich’s was a ride on an airplane.

This is an unretouched screenshot of Obama’s appearance on Good Morning America filling out the March Madness brackets on live TV.  Of course, the real March Madness is that while FOX News actually did a tough and revealing interview with The One this week, the rest of the drive by media is still doing fluff pieces on him. 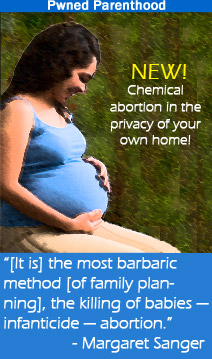 Planned Parenthood of Southwestern Oregon plans to give take home abortion medication to their clients beginning next month according to KEZI-TV. Now you can abort your baby where you conceived it, in the comfort and privacy of your own home. They have such wonderful, inspiring posters on their site, where they also recruit high school kids to “Join the REVolution” and go out into the community to celebrate the wonders of promiscuous hook-ups and avoiding the “punishment of an unwanted child”. The staff at Prez Suit just had to make their own inspiration poster!

By the way, those are actual quotes from Margaret Sanger, the founder of Planned Parenthood. In the 1930’s, she believed that the hundreds of thousands of abortions performed in America every year were a disgrace. We wonder what she would say about millions.